Last night was the cast and crew screening for the long awaited L’Assenza. Directed and written by Jonathan Romney and produced by Carey Born, of First Born Films. It is a short film funded by BFI, about a mans obsession with a B&W italian film from the 1960s. I had the pleasure of being the ‘stills’ photographer for production. A selection of images can be found in ‘Collaborations’ Portfolio 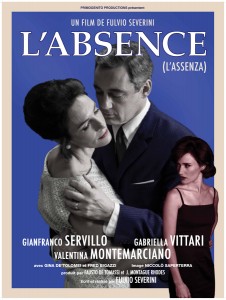 This is the poster for L’Assenza, the black and white film which is the film inside the film! Photography by Fiona Yaron-Field